DESSERT
We actually already closed our gathering at midnight, what was left for the cake was almost the remnant. Suddenly, the rain start to fall again, heavy and like forever. We took our decision to go downtown. I couldn't fully concentrated because I already crossed my curfew long enough to the point making my response and reflex was slowpoke. What happens during the round trip, let's just become our secret. Arrived at LZ at about 0130, I muttered, "Oh, it's already Saturday!". Aya sent me home, thank you so much. Thank God someone opened the door for me, and I was just like barging to my room and then...oyasumi nasai...

Okay, that was my story, how about yours?

We accept every single advice, criticism and excoriations for further improvement. Please support us! Any review about the discussions, the participants, the food, the place, the time etc are more than welcomed!
Posted by Yukikawaii at 17:07 No comments:


MAIN DISH
I sent notifications twice to the participants so they wouldn't forget or late. Don't you dare break my heart, Guys. The Landing Zone (LZ) was at Tugu Station. We agreed to put our motorcycles there and marching from there together. "Rain...I actually love you. It's pure and sincere feeling toward you...but please...just for today, don't do that", that was what my pray yesterday. But yeah...I think it was raining because several guys and gals also broke my heart, Sis Aquart, Keima-kun, Sis Rattri and Joelista couldn't participate. It's still water drop though. Sis Aquart was celebrating her birthday with her family (hey, I bought cake and we ate the cake for your sake, Sis), Keima-kun was already drenched and decided to go back, Sis Rattri had sudden business and Joelista was MIA.
Chronologically: Big D (wearing army pants) and Oom Ian (wearing red Angry Birds jumper) were the first reach the LZ. Aya (wearing flashy spectacles) and I arrived at LZ around 1930 (I bought brownies first). Agus with his "Fuck Yea" T-shirt appeared from thin air like a boss, he just arrived from Malang and hadn't slept for two days. Eh?!. Jibril arrived just after he called me like er...twice or so, wearing elephant colour sweater. Alund (with flip-flop) and Clink (hey, we're like twin, Bro) emerged from Masnyo's car (four of them were in the same car). Dika with her untied hair and Masnyo with blue sweater followed behind them. Mbah Jafar happened to troll me, but he finally arrived. And of course...FB, our self-proclaimed cute prince drifted to the LZ. Finally! After a short briefing, praying and taking pictures, we marched! FYI, we finally only used three cars. Aya's batmobile was left behind. Team Masnyo: Masnyo, Dika, Alund, and Clink; team Big D: Big D, Mbah Jafar, Jibril and Oom Ian; team FB: FB, Agus, Aya, Yuki.

"Actually, I forget to bring my glasses, Guys. I can't see well without my glasses", FB murmured when he ignited the engine.
"Okay! I can be your driver", I shouted non-chalantly.
"Agus haven't slept for two days. Neither Aya. He had long shot shooting schedule", I reckoned
FB in *poker face, "Never mind!"

Wuah! It was still rain at Yogyakarta second floor. And guess what? We were the only ones occupy the hut! Fantastic! After quick glance to Aya's watch (oh, it's already 2100), I started the main event without delay. We started order the menu. I took two bowls of "mie rebus telor", actually want to order three, but.... One by one, we introduced ourselves. Chronologically: Oom Ian, Agus, Dika, Masnyo, Jibril, Alund, Mbah Jafar, Clink, FB and then Big D. Aya and I hadn't done introduction and interrogation session. Xixixi....

I better keep in darkness what the interrogation parts for myself. GOSSIP-GOSSIP-GOSSIP! Thank you guys and gals, you made my heart warm just like the mie rebus and the chocolate milk. Time flied very fast when we are with someone we love. Thank you for the participation. I really really grateful to have you all sat with me yesterday and warmed and screwed my heart respectively, still I LOVE it, Guys and Gals! Once again, I'm grateful we can congregate together under the same roof's discussion. You see...even though we can't see the stars, they are always there.

Okay, I think I was super excited and mega motivated to the point I made the field report of February 2012's gathering into two parts in the real thread :P. But I guess it will be a very long post if I put that into this blog, so instead to go linear with the thread, I will divided the field report into THREE posts! Yeah....no kidding.

So, here was the invitation of February 2012's gathering,and I will present you with super long field report ;). Oh yeah, the link for pictures from Mbah Jafar's camera were broken. Too bad! And I don't want to bother myself to ask the pictures. Too much hassle and I don't know when he will reupload the pictures...soo...yeah, I think I will just use the valid pictures from J's camera (fortunately). I hope we upload the pictures into reliable image hosting from now on.

English Corner Gathering RY : In This Rain You Warm My Heart
FIELD REPORT


Greeting to the all dwellers of English Corner!
English Corner Regional Yogyakarta (shortened Ecorey or Ecory) had already executed its FOURTH gathering. The review as follow:

Our fourth gathering actually had tagline: Starry Night at Starhill (JC proposed that), but since it was raining all the time during our gathering, so I took deliberately to change the tagline

. Sorry, JC, it barely no star can be visually seen during our conclave. And yeah, my chosen tagline is pretty lame and cheesy, but yeah...I think it's decent enough since I indeed feel warm. 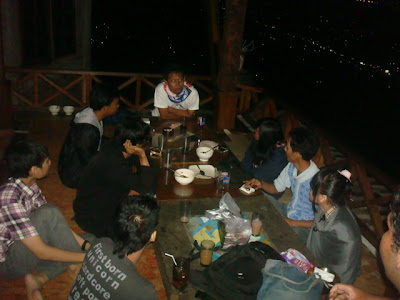 Thanks to God we were finally able to hold our fourth gathering, thanks to all the participants who spare their time for attending this gathering, thanks to the participants who actually wish to come but suddenly had another date with another destiny (JC, Sis Aquart, Rattri, Joelista and Keima-kun). Thanks to Mbah Jafar's and Jibril's cameras, also the activists happened to participate last night. YOU GUYS ROCKS!

.
I also want so said SORRY for everyone who actually want to join our gathering but hadn't gotten my PM/ SMS due to uncertainty issue. See the reason below. Keep reading-keep reading...

This was pretty CRAZY gathering!

. We actually already planned it far before, to be exact just after we finished our third gathering. Literally. JC and Aya came up with the idea (the venue). Big D also played important part here, he yearned for night or midnight gathering . I just got agape hearing about the idea, but I only nodded that like saying "Hey...let's do that".

Here came the delicate and crucial part, where we should congregate and what mean of transportation we would have. So here we had our heroes: FB's, Aya's, Big D's and Masnyo's cars . Yeah! For efficiency, safety and coordination purposes, we decided to take cars as our means of transportation. Moreover, the place is pretty far and the track is steep. Tokyo Drift anyone?

Firstly, FB wasn't sure whether he would participate or not since he is busy dating with his girlfriend. Masnyo also had house renovation issue but finally managed to come! We hadn't decided the date yet until someone sent me PM saying that she would like to join the gathering and that should be a surprise for certain persons. Okay. So I just kept silent and planned all with my comrades. We finally decided to execute the plan at Feb 3rd. Oh well, it's swim or sink, so let's just do that!

. How could you break my heart, Bro... Oh well...but he has TOP Umbra mission that shouldn't be hindered so, aye-aye, brace yourself, JC was fighting for his dignity "seriousface.jpg. One of our special guest from Australia, Aizen-san also couldn't make it to our gathering. I yearn to hear his Australian accent. WUUUUT? Two guys broke my heart. Mod Orthanc also couldn't attend because he had issue with his cousin. WUUUT again?! Now it became three

. You three should treat me something yummy when we meet.

So it seemed that Dika, one of the regular posters in Ecorey Version 1.0 (hosted by Jibril a.k.a J) were going to visit Yogyakarta. She just graduated from her Senior High School and wanted to meet Ecorey's dwellers directly at all cost. Of course we wanted to pamper her with different kind of gathering. So, Febryary 2012's gathering was different from the usual Ecorey's gathering. We held it in the outskirt Yogyakarta.

Menu
Variable but not more than IDR 15K.
Extra charge IDR 5K per person for the reservation place.

Posted by Yukikawaii at 15:30 No comments:

I wouldn't address English thread as a community as what Regional Yogyakarta dwellers mostly addressed it for :P. ECOREY isn't a community. I repeat, ECOREY ISN'T A COMMUNITY. So for those who still fuss, brag, whine, confused, pretend, conspire, and think that ECOREY is a community... well... I can't help you with the gyrus in your brain, so just mind your own business. In simpler words, just go fuck yourself. Oh my...I shall stop lashing out my thought too loud.

Before I post about the current threads of any English threads available in Kakus Realm (regional based), I'd like to share about ECOREY's rule (posting in the thread).

1. Use ONE ID only, whether its your prime or your clone, but please be responsible. If this is your first time stop by this thread, please do read the rules first, and introduce yourself. You may take a sneak peek to page one. We have tons of interesting stuffs there.

2. No INDONESIAN whatsoever is allowed in this thread!

3. No SPAM or anything that may/ can harm an individual(s).

4. Please don't post insignificant comments such as "PERTAMAXXX", "flip the page" or emoticon only.
- Junk posts will be deleted, persistent survivors will be banned.
- If you really appreciate the poster then the least you can do is write a couple of sentences to show your appreciation.
- Good Reputation Point may be given to an individual(s) as a reward of your appreciation.

5. If you notice someone posting in INDONESIAN, please let her/ him knows that this thread is strictly ENGLISH.

7. Please use quote and multi-quote if you are referring a post(s).

8. RESPECT OTHERS AND YOU WILL EARN YOUR RESPECT.

Email ThisBlogThis!Share to TwitterShare to FacebookShare to Pinterest
Labels: ECOREY

Above is the current English Corner Regional Yogyakarta (ECOREY)'s banner in page one of the active and non-active thread hosted by me, Yukikawaii. I just thought that decorating page one is a must for my in-charge thread. I believe there's no English threads in Kakus Realm are bothered enough to make their own banner but Ecorey :P.

Speaking of which, Kakus was migrated to the new hosting so some of English threads have some issue like buried or rendered inactive in the old Kakus. I will post my investigation about all English thread spread throughout Kakus Realm, not to mention the fabulous and almighty English Forum ;).

See you on my next post~
Posted by Yukikawaii at 06:10 No comments: